This page describes the limits Sumo Logic enforces on the metrics you ingest into Sumo Logic, including data volume limits and metadata-related limits.

For information on metrics retention, see Metric Ingestion and Storage.

It is important to understand the volume of metrics that you are ingesting into Sumo Logic.

For billing and reporting purposes, data volume for metrics is measured in Data Points per Minute (DPM). When the DPM limit is exceeded, data is cached on the host and the Source is throttled. To check your current account usage relative to your available DPM limit, see the Account Overview tab of the Account page, at Administration > Account.

The calculation of DPM varies according to the type of metric Source.

Some Amazon namespaces report metrics every minute, while others report every five minutes.  For each metric type, five individual metrics are reported (average, sum, samplecount, maximum, and minimum). The number of reported metric types varies according to namespace (a good general guideline for estimation is 10 per namespace instance).

See the AWS documentation for details on the metrics for different namespaces.

This section describes the limits Sumo Logic enforces on the metadata tags attached to ingested metrics. These limits apply to both metric dimensions and metatags. We use the term dimension to refer to metadata that uniquely identifies what the metric measures. We use the term metatag to refer to additional, but not identifying, information about what the metric measures. Metatags provide context about a metric, and are useful in querying your metrics.

Except where noted, the metadata that Sumo Logic requires or adds to metrics, listed below, do not count towards the limits described below:

Total length of metadata per metric​

For any single metric, Sumo Logic will accept a total of 4000 characters of metadata, excluding the tags that Sumo Logic requires or adds to the metric. Metrics exceeding this limit will not be ingested.

Number of dimensions and metatags​

For any single metric, Sumo Logic will accept a total of 100 dimensions and metatags, excluding the tags that Sumo Logic requires or adds to the metric. Sumo Logic excludes metatags first, and dimensions, as necessary.

The name (key) of a metadata item, whether a dimension or metatag, is limited to 255 characters. Any name exceeding this limit will be removed from the metric.

The value of a metadata item, whether it is a dimension, metatag, or metadata required or added by Sumo Logic, is limited to 400 characters with one exception: the  _rawName tag in Graphite metrics is limited to 1000 characters. Metadata whose value exceeds this limit will be removed from the metric. If the removed tag is _rawName (in Graphite metrics) or metric, the whole metric will be ignored.

When one of the limits described above is exceeded, Sumo Logic creates a MetricsMetadataLimitsExceeded Health Event for the associated Metric Source and writes an error or warning message to the Audit Event Index.

Here is an example of a Health Event for a Metrics Source that sent offending metrics: 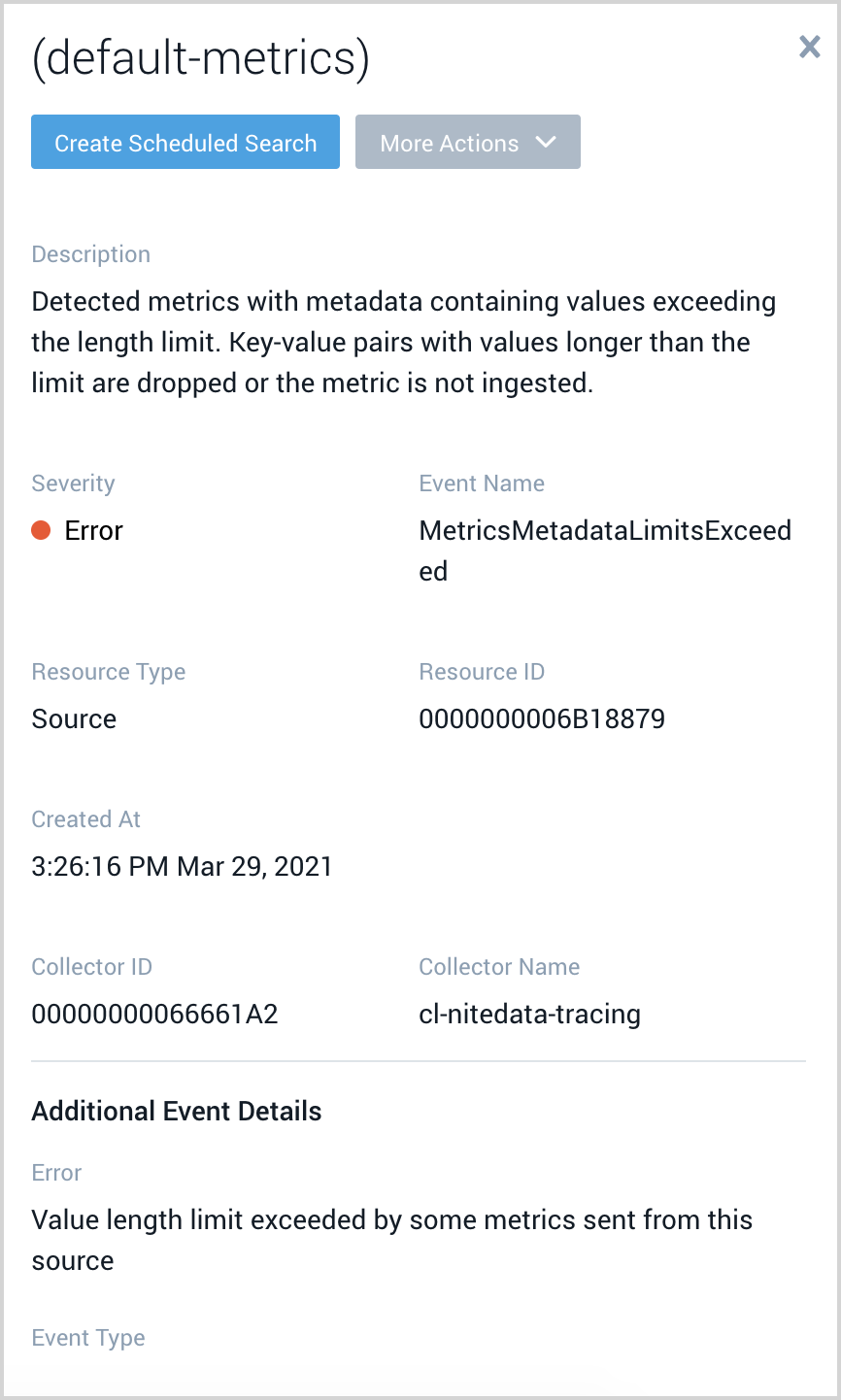 Here is an example of an Audit Event Index message generated when metrics sent to Sumo Logic exceed the metadata value limit.