For more information on Regular Expressions, see the Perl documentation. Or try the regex tester at regex101.com.

You can use the alternate term "extract":

You can convert your normal regular expressions into named capturing groups with the following steps:

Wrap everything in parenthesis, and append “?” followed by a capturing group name enclosed within “\>`”. Let's see an example below, the highlighted portions is what has been added.

If your regex contains a capturing group (part of the regex is enclosed within parentheses), then you have two options:

Extracting IP addresses from logs is straight-forward using a parse regex similar to:

Parse regex supports parsing out multiple fields in one query. For example, say we want to parse username and host information from logs. Use a query similar to:

Indicating an OR condition to use non-capturing groups​

In situations where you want to use an OR condition, where you have multiple possibilities that may match the regular expression, the best practice is to use non-capturing groups (?: regex).

The Sumo Logic query language requires groups that are not captured to an alias be marked explicitly as non-capturing groups.

To specify a list of alternative strings in a regular expression, use the group syntax. For example, for the following two log lines:

you can write the following query to extract the "protocol":

But if you mean to also capture whether it is an "accepted" or a "denied" into an alias, then you'd include:

parse multi is not supported in Field Extraction Rules.

In addition to parsing a field value, the multi option (also called parse multi) allows you to parse multiple values within a single log message. This means that the multi keyword instructs the parse regex operator to not just look for the first value in a log message, but for all of the values, even in messages with a varying number of values. As a part of this process, the multi keyword creates copies of each message so that each individual value in a field can be counted.

For example, in the Amazon VPC flow logs you can identify the messages with the same source and destination IP addresses using parse regex multi. 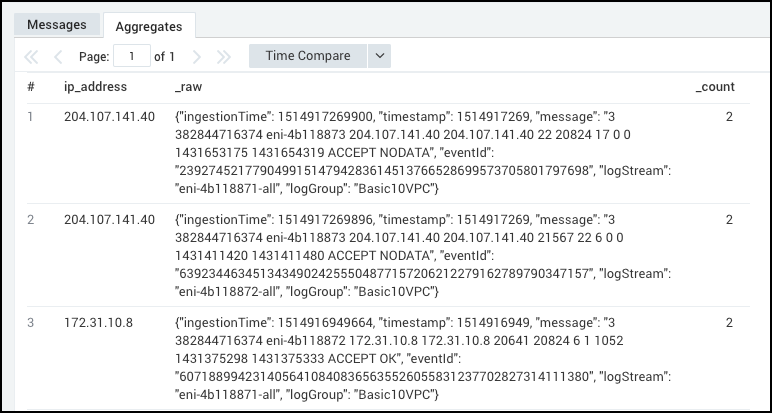 You can tell the parser to use case insensitivity by supplying the regex parameter of (?i). For example, let's say we have the following log messages:

Line1: The following exception was reported: error in log

Line2: The following exception was reported: Error in log

Line3: The following exception was reported: ERROR in log

Use the following parse regex expression to match the "error" in the logs. The (?i) tells the parser to ignore case for the trailing expression.

This would result in the following parsed fields

You can also use the toLowerCase and toUpperCase operators.