Given a series of time-stamped numerical values, using the outlier operator in a query can identify values in a sequence that seem unexpected, and would identify an alert or violation, for example, for a scheduled search.

To do this, the Outlier operator tracks the moving average and standard deviation of a numerical field. An outlier is identified based on a specified threshold of standard deviations around the expected value. If a data point is outside the threshold, it is considered to be an outlier.

The second syntax example uses an additional “group by” clause to find outliers for multiple values of a field. See the example below for details.

The following table lists the fields returned in outlier results:

You can configure options by setting parameters through keyword arguments, such as window, threshold, consecutive, and direction.

For example, this query would set the following parameters:

Run the following query to find outlier values in IIS logs over the last 6 hours. 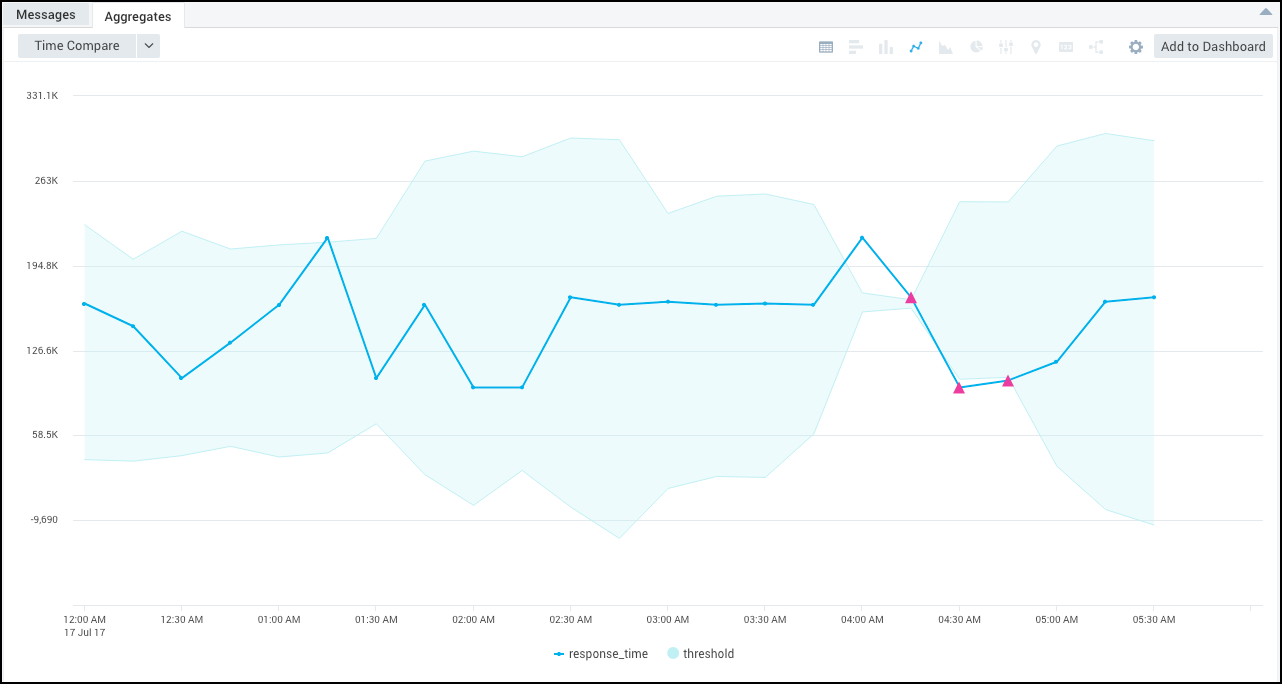 The outlier values are represented by the pink triangles in the resulting chart.

Run the following query to find outlier values in Apache logs over the last 3 hours. 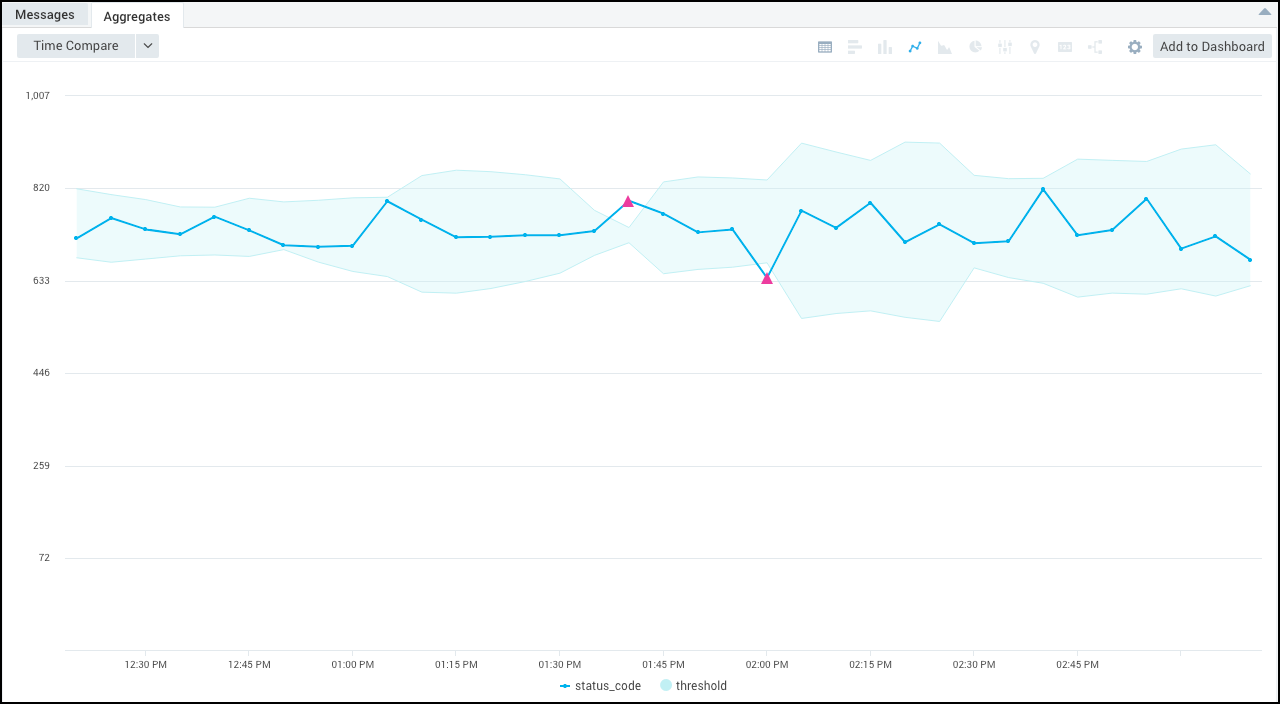 The outlier values are represented by the pink triangles in the resulting chart.

Use an additional “group by” clause to find outliers for multiple values of _sourceHost.​

This way, you can run outlier analysis separately for each value of _sourceHost, as shown.

This example will only produce an aggregation table, not a chart, but the indicator and violation fields will correctly reflect each _sourceHost processing.

Alert on an outlier​

The Outlier operator supports multidimensional or multi-time series detection. Multidimensional outlier detection is useful when you want to monitor the behavior of each user, server, application feature, or other single “entity”, rather than some aggregation across all entities.

If you have used the outlier operator, it is easy to create a multidimensional outlier operation. Just add by <dimension> to the end of the query.

For example, the following example query will determine many time series, one per each _sourceHost:

You can display the raw results of a multidimensional time series in a table chart, but currently other chart options are not available.

In the following table chart, a value of 1 in the _count_violation column indicates that the data point corresponding to that timeslice is an outlier.

Alerts Based on Multidimensional Outlier Results​

To create an alert based on the multi-series outlier table above, extract _count_violation.

This way, you will not need to build an alert for each series of data (each _sourceHost in the previous example), and you can automatically monitor a dynamic series for deviating behavior.

The following example query allows you to monitor when application users experience failures. It monitors all user accounts by unique user ID, and applies outlier to the amount of “fail” messages that occur across every user account:

Once you have run the query, you can click Save As to create a Scheduled Search and configure it to send an alert when any user account experiences an unusual amount of failures, or other event you want to monitor each series of data for.

To visualize your results, on the Search page, you can create a column chart, then change the stacking property to normal to display alerts by unique user_id (the multidimensional aspect).

This section provides two examples of how to display multidimensional outlier results in charts.

In this example, we’ll extract _count_violation from the multi-series outlier table and display that. This allows you to display the distribution of outliers among various time-series.

When you select a line chart, this example will display something like the following: 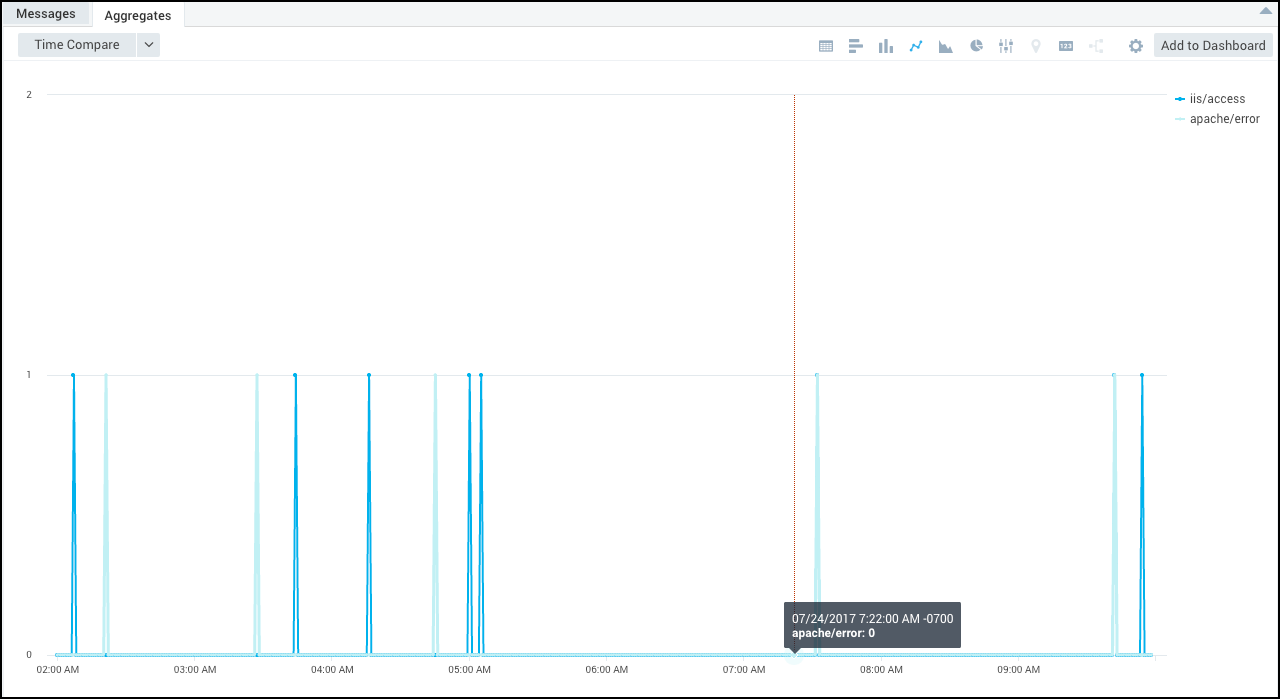 This way, you can display outliers visually in terms of deviation from the expected value.

When you select a line chart, this example will display something like the following: 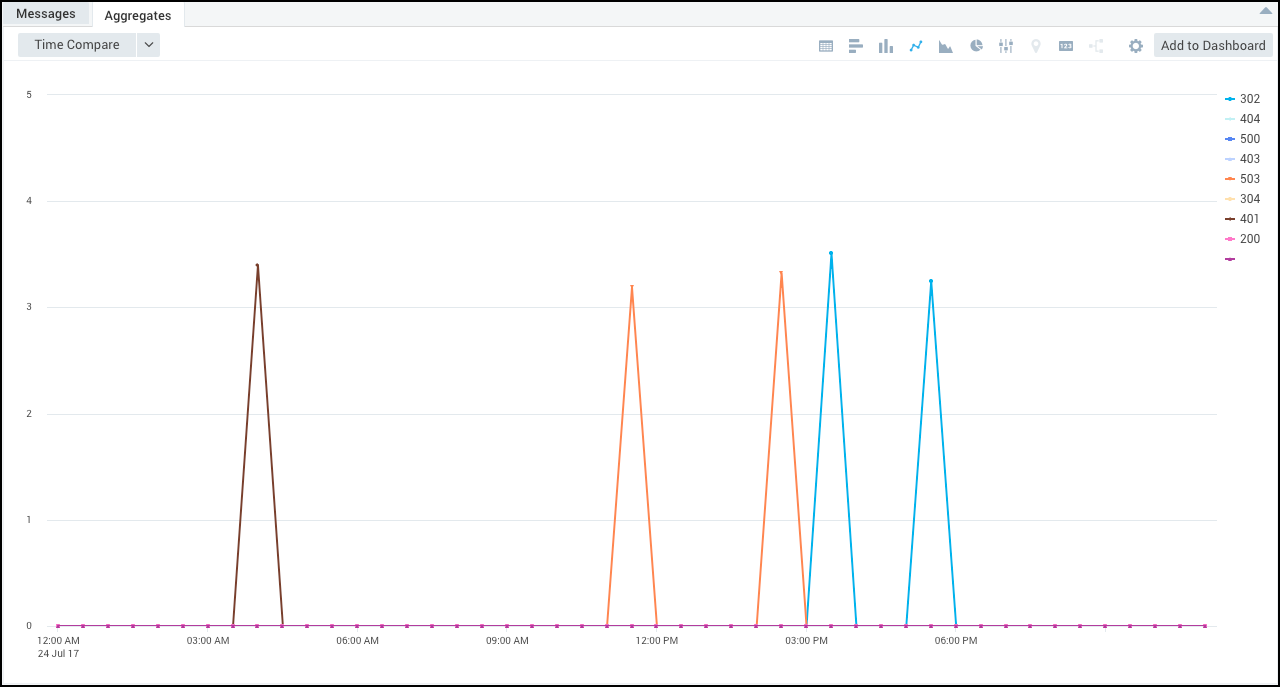 In the line chart, you can see which series is producing the most “deviating” outliers.

This approach effectively displays the severity of the outlier, because the spikes represent the magnitude (how many standard deviations the value is from the mean) in one time-series compared to another time-series.