No matter what type of data you are analyzing, from tracking website sign ups, to e-commerce data, to watching system activity across a distributed system, the transaction operator can be used in a variety of use cases. Ultimately, data is always ordered, at least by timestamp. But during analysis, the transaction operator can process otherwise unordered data and produce results using ordered data (data that has an ordered flow).

For example, if you operated a retail website, you'd use the transaction operator to track your customer's movements through the log events that determine the states of their transaction, such as login, cart, payment, and checkout. From the results of your query, you'd visualize your customers as they move or "flow" through the site as a Flow Diagram, and identify any problems, such as a drop-off at the payment state, which prevents them from completing their purchase.

Check out the following overview video. It reviews a search provided in the G Suite App for building a document flow diagram.

States act as matching statements, searching your log for that specific state. These support wildcards  * to match on any characters. For example, in the following log, if one of the states you needed to capture was when a session is started based on your parsed field sessionId:

you'd specify the state as a matching statement on the sessionId like this:

Think of states as a way of using log events and fields in your logs to plot the movement of data. The transaction operator needs to have these states defined to produce results. There are two ways you can define states.

The state is the text in the field.

Once states have been defined for ordered data, you can use them to order data using the fromstate and tostate arguments, described in the next section.

The difference between ordered and unordered data is the flow (order) that you define in a transaction query. Both types of data require you to define states. Ordered data is returned when specifying results by flow by referring to the latency between states. There will be a latency field generated by the operator that provides the milliseconds between states.

Below you will see two nearly identical queries. On the left, unordered data is searched, and the results are displayed in a table. On the right, by adding results by flow as well as counting the max latency between each fromstate and tostate, we can build a Flow Diagram. 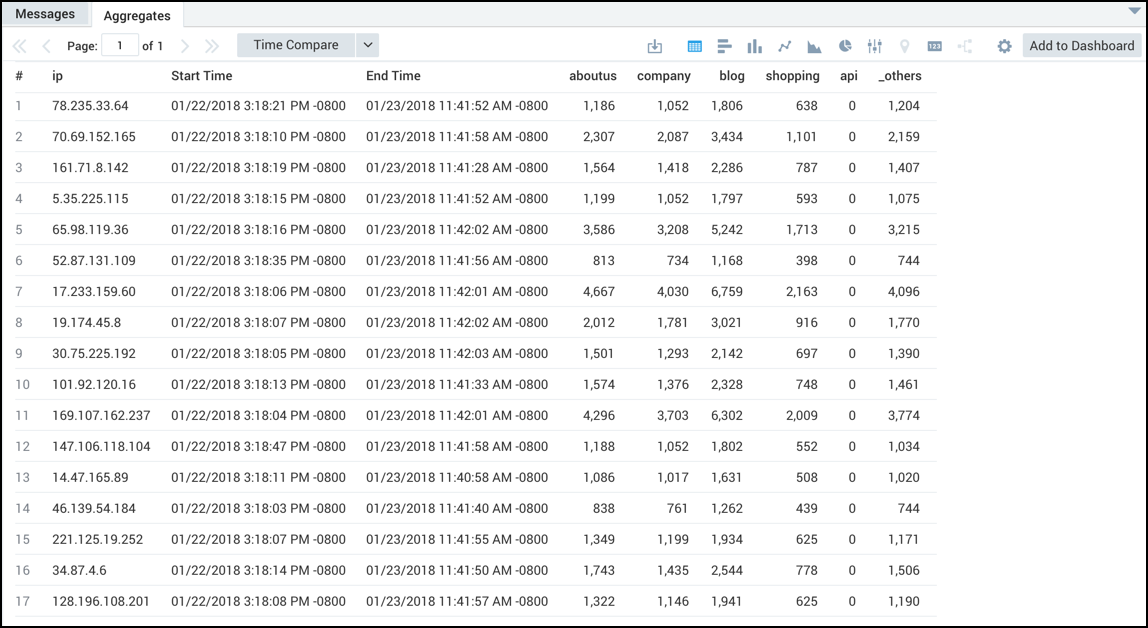 Since transaction operator queries are constrained by a time window, some transactions may be cut off if they occur near the edges of the time window. It is possible to filter them out using the fringe argument.

If tw is the time window for a query, then transactions that satisfy the following will be filtered out:

For ordered data, there is a group limit of 10,000. The transaction operator uses a least recently used scheme to phase out transactions. So when this limitation is reached, the transactions that are included in the results are not the first 10,000 transactions, but the 10,000 most-frequently used transactions. This is due to the fact that some earlier transactions have ended prematurely, as stated in the following error.

This message is displayed if you use more than 10,000 groups with the Transaction operator:

Group or memory limit exceeded, some transactions may have ended prematurely.

For unordered data, once group limit of 10,000 is reached, new transactions are ignored.

The following examples can help you understand the way transaction works.

When you use the transaction operator, it requires one or more transaction IDs to group related log messages together. For this ID, you can use session IDs, IPs, username, email, or any other unique IDs that are relevant to your query.

In this example, using the browser sessionID as the transaction ID, we could define states for countdown_start and countdown_done:

Use fields created by transaction​

There are two fields created by the transaction operator,  _start_time and _end_time. These fields show up as Start Time and End Time on the Aggregates tab, but you must reference them in queries using the names with underscores or we will not recognize them.

The fields are assigned a timestamp in milliseconds.

For example in the query:

You reference the _end_time and _start_time fields to calculate the duration of the sessionid. 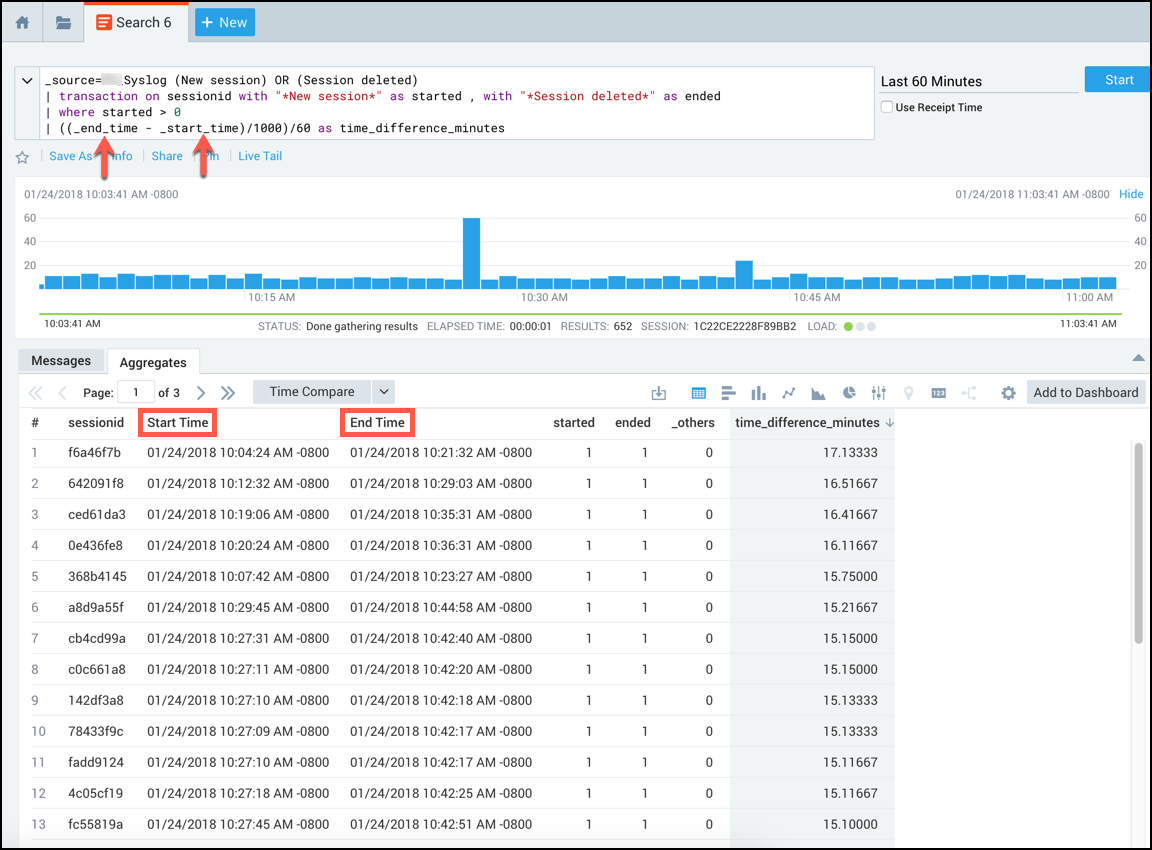 In this example, you'd track the states of your e-commerce site to see if there is a disconnect or drop off between two states that would indicate a potential failure.

Running a query similar to: