This topic describes Network Blocks and their purpose, and provides instructions for setting them up and using them.

In CSE, a Network Block is a CIDR block of IP addresses from your infrastructure that you label to provide context that can be leveraged in rules and is helpful in investigating Insights. For example, you could label one Network Block “Server Network” and another one “Workstations”.

When you configure a Network Block, there is an option to suppress Signals on the IP addresses within the block.

As you configure Network Blocks, keep in mind the following considerations.

Ideally, you should use Network Blocks to represent your topology both broadly and thoroughly. Any network address space that is in use should be accounted for at some level of detail. Broad descriptions of supernets that cover all allocated addresses are a start. Coupling a broad view with a detailed inventory is preferable. If you have address space that’s in use but not reflected in your Network Block configuration, associated traffic won’t be evaluated by rules, and problems might not be detected.

It’s good to define Network Blocks at both high and detailed levels. For example, you might want to define one high level block for your corporate network and another for your partner network, and also smaller, more detailed subnets within each. Nesting your Network Blocks provides more context. For critical assets that are static over time, it can even be useful to include /32 addresses.

Keep the labels you assign to Network Blocks short and sweet. Don’t include the CIDR block itself in the label. For example, instead of “Seattle Office 10.191.64.0/18” for a label, use “Seattle Office”.

In the case that the two or more Network Blocks overlap, CSE uses the smallest, most-specific block that matches the the IP address that's being looked up. For example, given these two Network Blocks:

When CSE looks for the Network Block the address 10.0.10.1, it will will return the more-specific block, "bar".

Follow these instructions to create a Network Block using the CSI UI. For information about creating multiple Network Blocks by file upload, see Upload a CSV file of Network Blocks.

You can define multiple Network Blocks in a .csv file and upload the file to CSE.

The table below defines the fields you can import for a Network Block.

Here is an example of a file in which all fields are supplied:

Here is an example of a file in which only the required field, address_block, is specified:

In the table below, the left column contains schema fields that contain IP addresses. The middle column contains the enrichment fields that are added to Records based on Network Block configuration. The enrichment fields in the middle column, which end in _location, are populated with the Label from a Network Block. Those in the rightmost column, which end in _isInternal, are populated with “yes”, indicating that the IP address is in a Network Block marked Internal.

The screenshot below shows a Record that contains several Network Block-related enrichment fields. Note that: 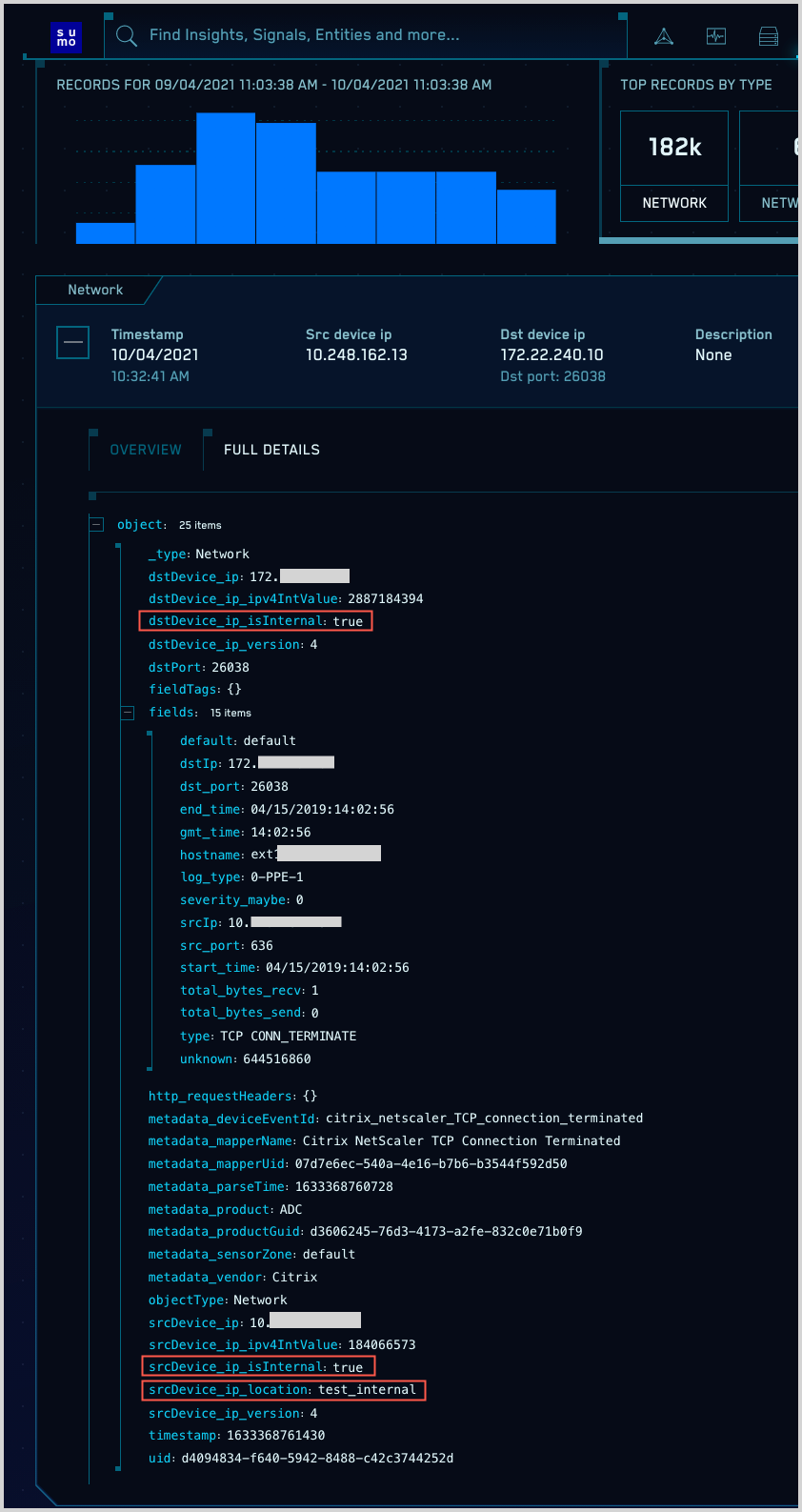 You can use the *_location and *_isInternal fields the same way you do other Record fields. You can use them to filter Records in rule expressions or in searches.