The timeslice operator aggregates data by time period, so you can create bucketed results based on a fixed interval (for example, five-minute buckets). Timeslice also supports creating a fixed-target number of buckets, for example, 150 buckets over the last 60 minutes.

There are two primary use cases for this operator:

Let’s say you log each time a user successfully logs into your service, and you want to track how many logins per hour, on a daily basis. You can use the timeslice operator to group the data into one-hour segments, and view the data over a 24 hour period.

To group data by (M) month you can use the formatDate operator to format _timeslice to a month format, like this: 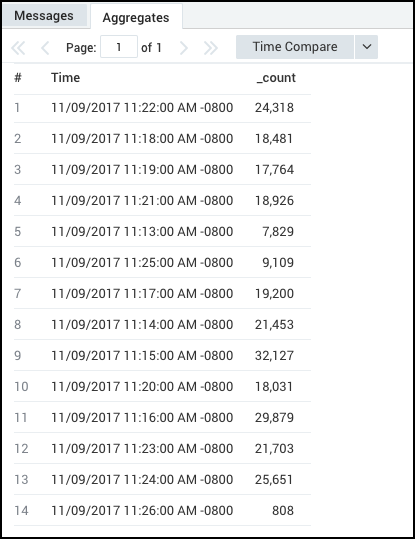 There is a known issue with the timeslice operator and Daylight Savings Time (DST). When the clock moves forward, any timeslice operation that crosses the DST boundary is affected. For this reason, results may show more than one entry for that day.

For example, in Australia, DST goes into effect on October 2nd for Spring. For that day, with a 1d timeslice, you would see two entries for the same day: one for 12 a.m. and another for 11 p.m.

Fixed-size buckets at 5 minutes. The output field is default _timeslice.

Fixed-size buckets that are 2 hours long. The output field name is aliased to 2hrs.

Bucketing to 150 buckets over the search results.

Fixed-size buckets of 1 minute each. The output field name is aliased to my_time_bucket_field_name.

This outputs a table in the Aggregates tab with columns _count and _timeslice with the timeslices spaced in 5 minute intervals:

This outputs a table in the Aggregates tab with columns _count, _sourceCategory, and _timeslice with 10 rows for each _sourceCategory in that table if you have messages covering the entire search period:

Example 1: Checking the server distribution over time to make sure the load balancer is working properly.

This query produces these results in the Aggregates tab, which you can display as a column chart.

Example 2: All computer access to Sumo Logic over time.

This query produces these results in the Aggregates tab, which you can display as a stacked column chart:

This query produces these results in the Aggregates tab, which you can display as an area chart: 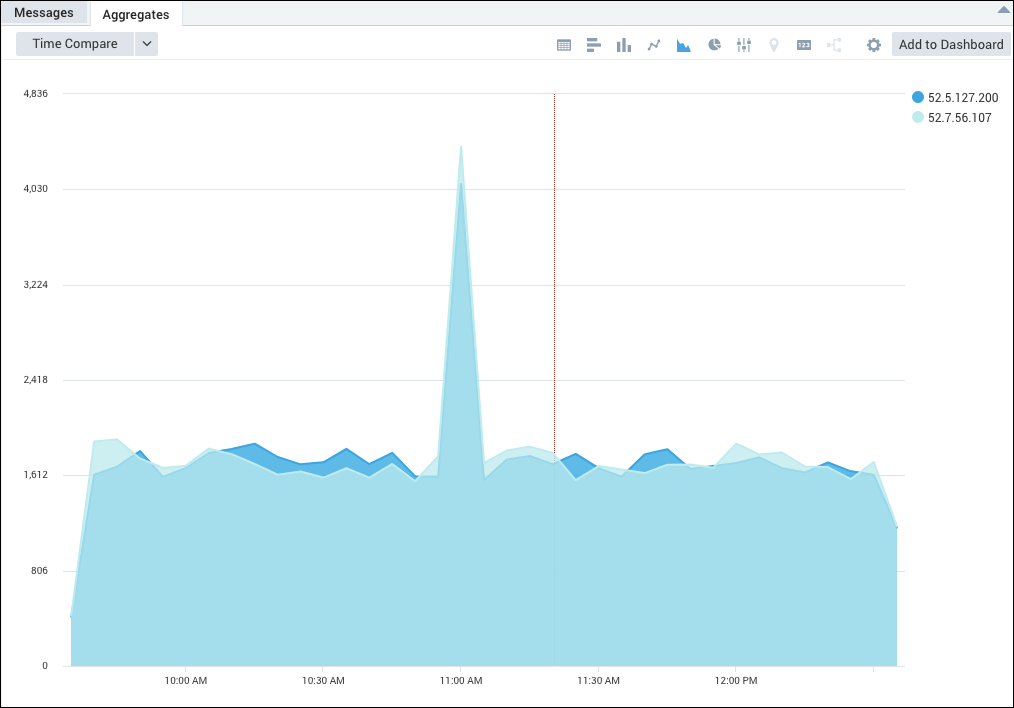 You can reference the table's _timeslice field to use in your group by operation. The name of the table is appended to the table's fields.

For example, if your table is named errors, your field would be errors__timeslice. (Notice that the name uses two underscores.)